These images of Hunua Falls on an average day and after Wednesday 8th of March extreme event (Auckland Council) Newshub.

The week of March 6th through the 12th of 2017 is one that the residents of Auckland will not soon forget. For Watercare, who are responsible for treating and supplying the city’s reticulated water supply (and waste water treatment) the event is likely to stimulate some strategic thinking. With widespread rain and three ‘pulses’ of extreme but short duration rain in different parts of the city its services were stress tested. One of the foci for extreme rainfall was in the Hunua-Wharekawa ranges located southeast of the city. This elevated area plays a critical role in the ever expanding footprint of water capture for the country’s primate city. Water has always been a challenge for Auckland City. From the development of the first piped supply from a small crater lake in the Auckland Domain in 1869. Today water is sourced from the Waitakere Ranges to the west of the city, the Hunua-Wharekawa Ranges to the Southeast and the Waikato River (pumped and piped 37 kms from the lower Waikato river to Auckland City.

The six day rain event across the Auckland region had several distinctive ‘heavier’ spells. However this blog is only looking at the extreme roughly 24 hour event that took place in the Hunua-Wharekawa ranges. It was this event that triggered the risk of a water boiling notice being issued for areas of Auckland City that receive water from the Ardmore Treatment plant that receives its source water from the Hunua-Wharekawa ranges.

There were various statements issued such as NIWA’s Ben Noll’s comment that Hunua saw a 1 in 100-year rain event (Lawton, 2017) and Professor James Renwick’s comment in reference to recent rains in California and New Zealand: “. . . that's exactly the picture, you get long periods of severe drought and then when it starts to rain it really hammers down”. The event in the Hunuas that lasted just over 24 hours started on Tuesday afternoon the 7th of March and extended through to Wednesday afternoon the 8th. For this analysis we have gathered various sources of data to compare this event with historical rainfall records and to explore potential future extreme events with climate change.

It is important to note that many rainfall records are collected using equipment that records rainfall on a 24 hour temporal scale i.e. once a day recording typically starting at midnight or 8am or 9am each day. As is exemplified in the case of the Hunua-Wharekawa extreme event the examination of typically recorded daily time step records would have missed the extreme nature of the event. It also points to the importance of sub-daily and even sub-hourly data for rainfall where extreme events are concerned.

Many of the rainfall stations in the Hunua-Wharekawa ranges area have been closed (Table 1) so we accessed rainfall data from a local citizen weather champion’s site. The total rainfall on the 7th of March was 89.7 mm. On the 8th of March the total was 185.7 mm so that the total over a roughly 24 hour period over two days reached 275.4 mm. Note that the graph on the 8th of March (Figure 2) failed to display the total of 185.7 mm for the day owing to limitations of the display software package. Over the first 12 days of the month 498.5 mmm of rain fell in the vicinity of the Hunuas as recorded at the Young’s recording site with 454.4 mm of that falling over 5 days.

Table 1: Rainfall totals for days with rain at the Young’s recording site from 1st to 12th of March. 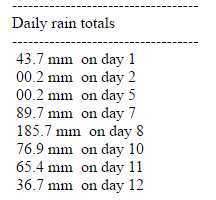 Table 2: Historical and current rainfall gauging sites in the vicinity of the Hunua-Wharekawa ranges area. Percent is the percent of complete records for the recording period of record. (Source: NIWA CliFlo database)

Only two of the 15 historic rainfall gauging stations in the region of the Hunuas are still in operation of those listed in NIWA’s CliFlo database. For the 7th and 8th of March those two stations recorded only 30 mm on the 7th and 20mm of rainfall on the 8th of March. Clearly the extreme aspects of the regional rainfall event were highly localised.

We looked across the 14 closed sites and found that the highest daily rainfall total was on the 2nd of March 1967 and was recorded across three sites near the Hunuas: Rose: 203.5 mm; Cosseys No 1 210.8 mm; and, Hunua Nursery 190.5 mm. There was definitely a spate of recorded extremes for the Hunua area in the late 1960s and 1970s as derived from the 14 closed NIWA CliFlo site data records. This begs the question . . . are we within a Pacific oscillation cycle as identified by Salinger, Renwick and Mullan in their 2001 paper on Interdecadal Pacific Oscillation and South Pacific Climate (Salinger et al., 2001) but with the added veneer of climate change?

Figure 1: Rainfall profile for Tuesday 7th of March from Youngs Weather Site (Gelling road in the Hunua/Ararimu area in the Hunua ranges).

Figure 2: Rainfall profile for Wednesday 8th of March from Youngs Weather Site (Gelling Road in the Hunua/Ararimu area in the Hunua ranges).

The peak hourly rainfall intensity over the roughly 24 hour event was 49.8 mm from 12:19 pm to 1:19 pm on the 8th of March. Based on the following historical extreme event data from NIWA for the Auckland region the hourly extreme is approximately a 1 in 30 year event while the slightly greater than 24 hour event is indeed very close to the 1 in 100 year event intensity.

Table 3: Extreme rainfall amounts from 10 minute to 72 hour events and their return period from 1.58 years to 100 years. AEP=Annual Exceedance Probability that is the percentage probability of a particular storm event being exceeded in any one year. Derived and processed from the NIWA High Intensity Rainfall System V3 (https://hirds.niwa.co.nz/)

Timber harvesting by clear cutting is known to impose environmental impacts, including severe disturbance of the soil’s hydraulic properties which intensify the frequency and magnitude of surface runoff and soil erosion. An intensified surface runoff is normally associated with post logging topsoil compaction. Meanwhile, slightly higher post logging infiltration, lower runoff also were registered in some experiments (Mohr et al., 2013). From the New Zealand literature once a threshold rainfall intensity of 20 mm/h was exceeded, the younger harvested areas started to act as a source for both runoff and erosion after connectivity was established, whereas they remained sinks under lower rainfall intensities (Mohr et al., 2013). During the March 2017 extreme event there was at least one 1 hour spell when intensities exceeded 20mm/hr. Post event discussions with forestry block holders in the area noted that they had experienced considerable damage with intense erosion to even mature plantation forestry blocks while undisturbed native forest areas were relatively lightly impacted (pers comm).

Both the Waitakere and the Hunua-Wharekawa ranges comprise for the most part rugged, heavily-bushed country, well elevated and well watered. Land for water supply reserves has, under the city’s long-standing policy, been acquired and alienated well in advance of needs, so that reversion to scrub and bush of areas that have been cleared will be well advanced by the time catchments are brought into service. The reserves include ample protective fringe lands outside actual catchments. (Source: Firth, 1957:295)

The purpose of this blog is not to explore the contentious landuse history of the Hunua-Wharekawa ranges. Let it be noted that the above description has been superseded by the introduction of plantation forestry within the catchment areas that includes clear felling. There continues to be legal action on the designation of the use type for the area as exemplified by the Court proceeding dated December 11, 2015 whereby the submitter sought to 1] rezone the Hunua Forest from Public Open Space (Conservation) to Rural Production; or 2] provision for production forestry as a permitted activity within the Public Open Space zone, with amendments to objectives and policies expressly enabling existing forestry activities to continue. The Council did produce evidence on the rezoning issues that signified that it considers Public Open Space zoning is more appropriate owing to the water supply function of what is a regional park. It was further stressed that vegetation and earthworks rules are more stringent in Public Open Space zoning than with a Rural Production zone designation. 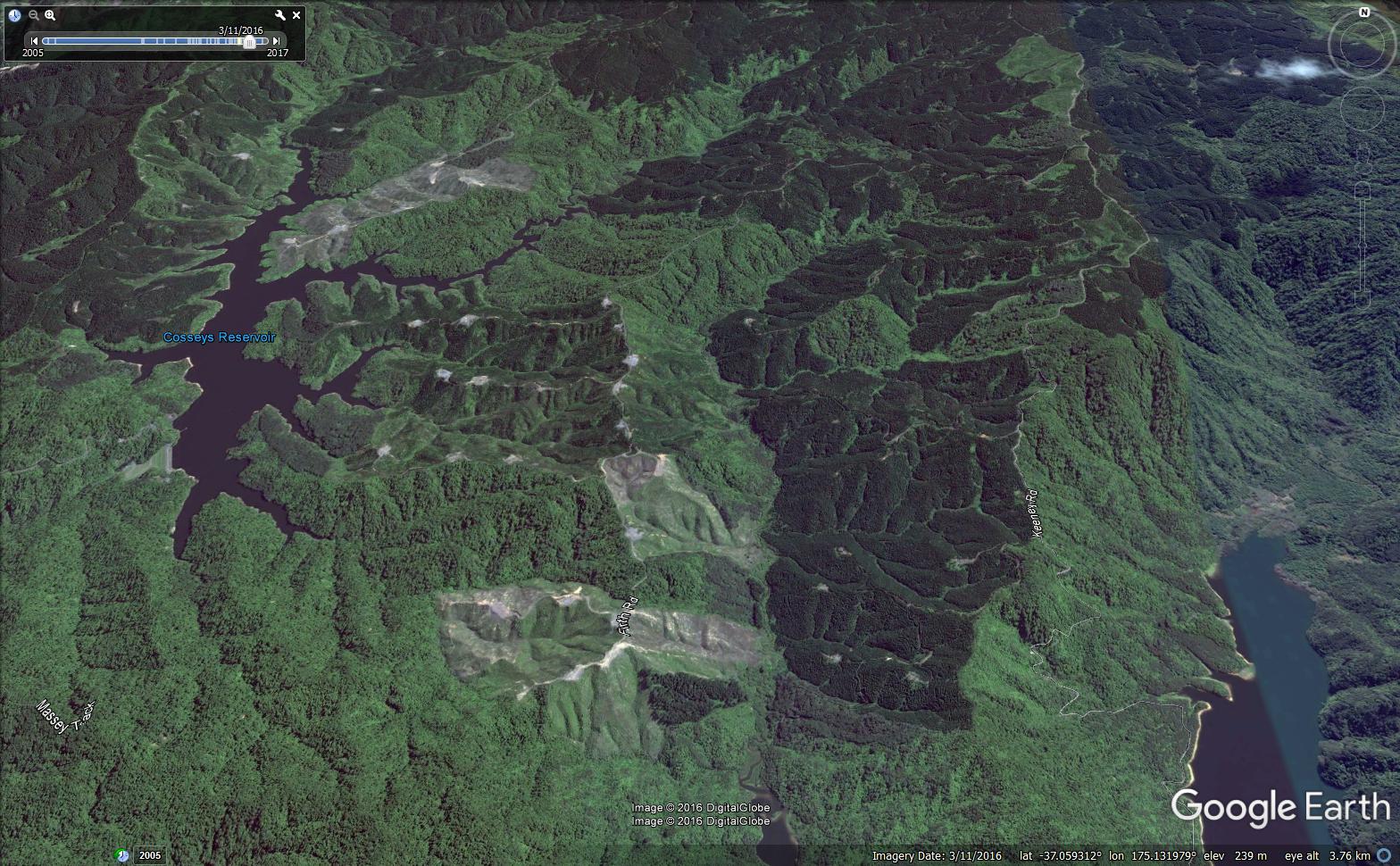 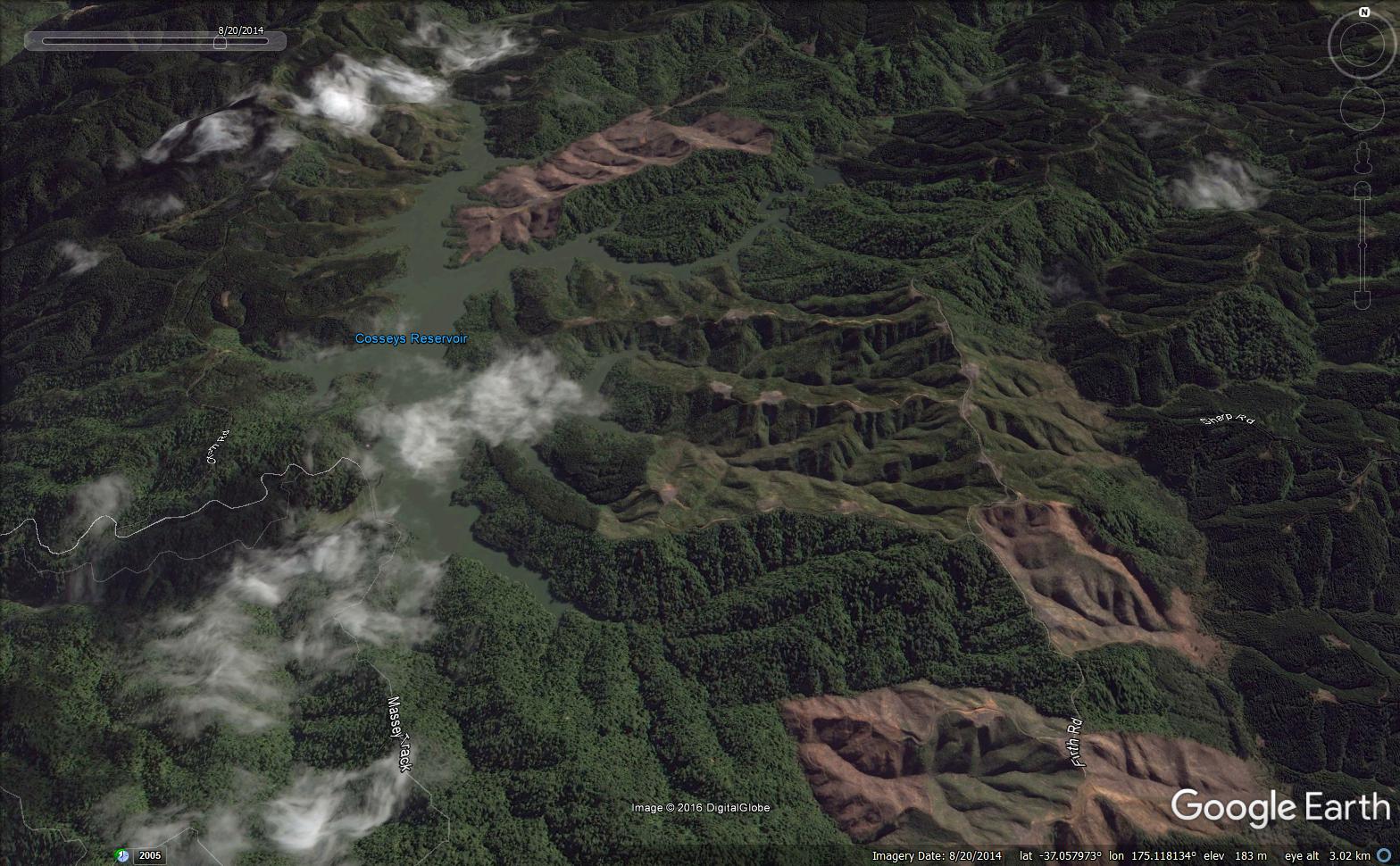 The Issues and Responses

There are a number of issues that need to be considered and responded to in the context of the recent extreme rainfall event in the Hunua-Wharekawa Ranges. First there has been a change in land use from that described in the report by Firth in 1957. The development of plantation forestry in the water supply catchments is a problematic one that will need to be resolved (currently being played out in the courtroom). Extreme rainfall can induce landslides and erosive events leading to increased sediment loads in stream and river courses - even within pristine and undisturbed native-forest dominated environments. In this case the reservoirs supply a major urban area in the South Pacific. The issue is a systems one that clearly links a range of elements together. These include forest cover, forest type, maturity of forest, the intensity of rainfall events and erosivity of various soil types (Basher 2014).

The capacity of the Ardmore water treatment plant to cope with heavily sediment laden source water needs further consideration, especially in the light of a changing climate.

There are a range of advanced technologies that enable a improved management of extreme sediment loads in potable water supplies. However pre-emptive strategic planning is required. The case of the City of Calgary and the Bow River floods of June 2013 are a case in point. During this event Calgary’s water treatment plants had approximately ten hours to prepare for the sediment-laden flood waters to reach their treatment plant intakes. Drinking water in Canada should have a turbidity of 5 NTU (Nephelometric Turbidity Unit) or less. Bow River seasonal averages for turbidy were around 10 NTU. During the flood, clarity reached 4,000 NTU. In spite of these extraordinary conditions the treatment plant produced water at 0.05 NTU.

It would be interesting to compare the turbidity ranges for Hunua water with those experienced during the Calgary extreme event. There would also be merit in comparing the performance of the sedimentation removal technologies used in each location. It is now one week after the event and Auckland still maintains a persistent risk of a “boil water” notice being proclaimed. With that would come the potential widespread health implications of boil water notice not being heeded by all. The strain on medical facilities and the economy could be considerable. Indirect ramifications include the reputational damage from media reporting resulting in risks to the tourism sector.

The next extreme rainfall event in the Hunuas may occur at any time. The wake-up call is ringing. If it is answered then the following should be considered:

Thank you to Donovan Burton of Climate Planning Pty in Brisbane, Australia and to the Youngs family for their citizen science rainfall data.