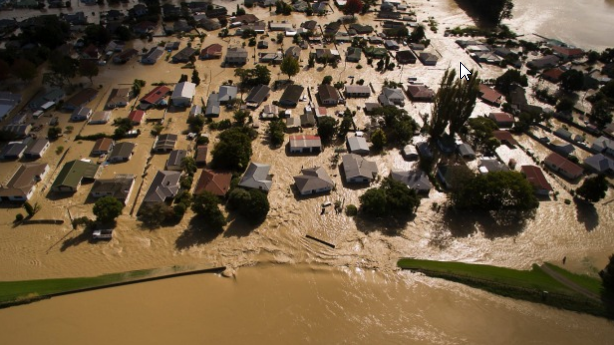 New Zealand has recently experienced some seriously damaging rainfall events. In fact, New Zealand has been described as a ‘Pluvial Society’ (Daya-Winterbottom, 2011) and we seem to be living up to that billing.

The recent event in Edgecumbe with the breaching of the stopbank and the impressive surge of water through the town and resultant dramatic evacuations have filled the news with imagery and some apparently off-the-cuff comments on the extreme nature of the event:

This from the Whakatane District Council: The Whakatane and Rangitaiki Rivers have experienced unprecedented 1:500 year flood events. That has seen breaches of stopbanks on both rivers. (Source: http://www.stuff.co.nz/national/91275516/In-pictures-Edgecumbe-evacuated-in-500-year-event)

The oft repeated statement across social media and the more established press has been the claimed fact that this event represents a 1 in 500 year flood. That statement itself is challenging to understand and creates some questions: 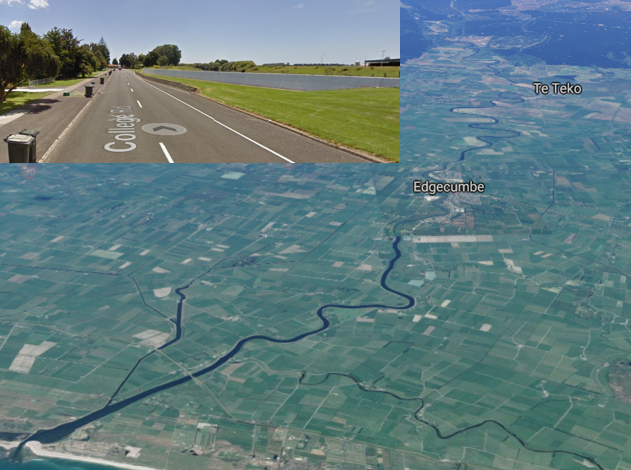 Figure 1: Location of Edgecumbe in the Bay of Plenty, New Zealand and the original stopbank at the point where it was subsequently breached.

There are various ways one can analyse the data. Over 27 years of daily data analysed from Whakatane the top 10 single day rainfall events plus the extreme daily value from the Te Teko rain gauge for the area and their dates can be seen in Table 1 below.

*Te Teko daily rainfall total of 195 mm when compared with historical rainfall at Whakatane Aero Aws places the event in the 199.0 year return period scale. Further analysis is required but this is indicative of the extreme nature of the rainfall event in the local vicinity.

As a single event the recent rainfall ranks very highly compared to the historical data available from the Whakatane Aero Aws site.

The analysis of consecutive multiple day events can also tell a story. We looked at two, three and four consecutive day events and the rainfall totals become more impressive. The highest four day cumulative event over the last 27 years at Whakatane Aero Aws was the flood event of 2004 when 291.2 mm of rain fell. At that time it was a 1 in 100 year event. In contrast, the recent event related to the Edgecumbe flooding when analysed over four consecutive days and totaled 195.4 mm for a return period of 1 in 76 years while four day cumulative total at the Te Teko rain gauge was 281 mm and in comparison with the Whakatane Aero Aws site was a 1 in 76 year event as was the three day total. Clearly the one and two day totals were extraordinary when compared with the cursory examination of Whakatane Aero Aws data that covered the 2004 extreme rainfall event. Over the two worst days of the current event Te Teko had 274 mm and Whakatane Aero Aws had 182.2 mm.

With climate change not only could the magnitude of a one day and multiple consecutive day events increase but frequency of such events is also likely to increase.

In summary, the Te Teko rain gauge site is very important to the understanding of the recent extreme rainfall event. While a cursory examination has occurred here it is worthy of further examination taking in a wider regional context where data is available. The multiple day aspect is also important but we should not lose sight of the extreme short bursts of rain such as the one hour total of 25 mm recorded at the Te Teko rain gauge.

The discussion of the temporal distribution of rainfall segues to subsequent flood profiles. The rainfall event largely centered on the 4th and 5th of April. This impacted on Edgecumbe but was preceded by significant events in early March and late March (see figure 3). The event of the 4th and 5th may have been exacerbated by these previous heavy events i.e. they could have led to already high regional water tables and changes in recharge rates and enhanced overland flow that were perhaps not represented in earlier stream flow data. Data on the water table characteristics should be available from GNS as they installed a network of lysimeters across the region for measuring recharge to groundwater (Lovett et al., 2015).

The rainfall event of the 4th and 5th could therefore have become just that much more potentially destructive as the capacity of the catchment to absorb yet another extreme rainfall event over an already wet month and perhaps over a wetter than normal year. All of these things should be considered when detailed analysis of the event undoubtedly occurs.

The peak flow rate for the recent Edgecumbe flood reached to approximately 850 m3/s. In recent history the 2004 flood reached a maximum at Te Teko of 760 m3/s, close to a Q100 flow based on 26 years of data to that time. Using BOP historical summary information from Te Teko 1980-2005 this year’s event is in the range of a 150-200 year event. However, the additional data since 2004 including the recent flow data shortens to approximately a 1 in 50 year event. These return periods are based on a rapid assessment and more thorough statistical analysis is required but we are fairly confident that the return period for the event period is shortening given the number of significant events in recent times. Furthermore with the next significant event the return period values will change again.

The critical point to be made is that extreme flood events are experiencing greater frequency and the signal is toward a shortening of the return period. Climate change is well known to be related to such non-stationarity therefore this needs to be incorporated into analysis, then applied to the design of a possible range of adaptation options. The uncertainties in the return year analysis, especially in such rare events have already been described by various experts (McQuiland, 2017). The important point being that if the current stopbank in its re-design once again applies a 1 in 100 design parameter then the risk of breaching will return again as the non-stationarity of extreme rainfall, as the modeling data already shows can occur. This is often the challenge when retrofitting infrastructure and buildings for climate change. They should be designed for the future not for the historical record i.e. the past.

This is where policy becomes important. As noted in the very helpful guidance document prepared by SOLGM:

There is no direct reference to climate change in the LGA (Local Government Act 2002). However, actions by councils are linked to the purpose of providing good quality infrastructure to fulfil the needs of communities and the performance of regulatory functions conferred by other legislation.

Good quality in this context means effective, efficient and appropriate to the future needs of the community. Climate change adaptation has links to all three of these elements of good quality. For example, greater frequency and severity of adverse weather will have implications for levels of service expected from protective assets such as seawalls and stopbanks (i.e. will raise the standard of what’s needed to be effective). Those planning renewal of infrastructure of any type will need to consider whether the communities of today will have to retreat in the light of sea level rise (or other land-based flood risks). (Source: SOLGM, 2016 (emphasis added))*

*See the SOLGM publication for more detail on climate change in the context of the Building Act and for more information on the Local Government Act in reference to hazards and infrastructure planning and the Government’s 2004 Climate Change Response amendments to the RMA.

Table 7: Rangitaiki river flood flow rates and return periods based on historical analysis conducted just after the 2004 event i.e. placing the current flood event in the context of previous events to 2005. 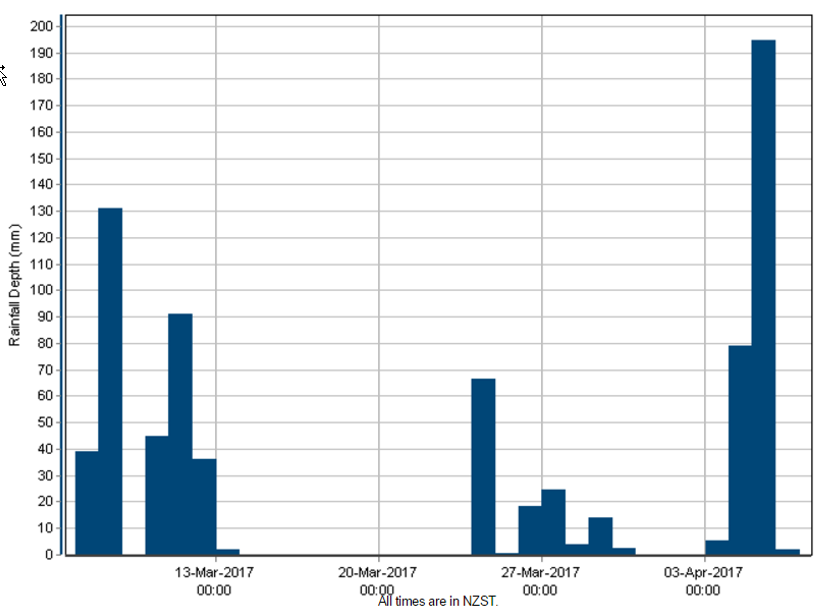 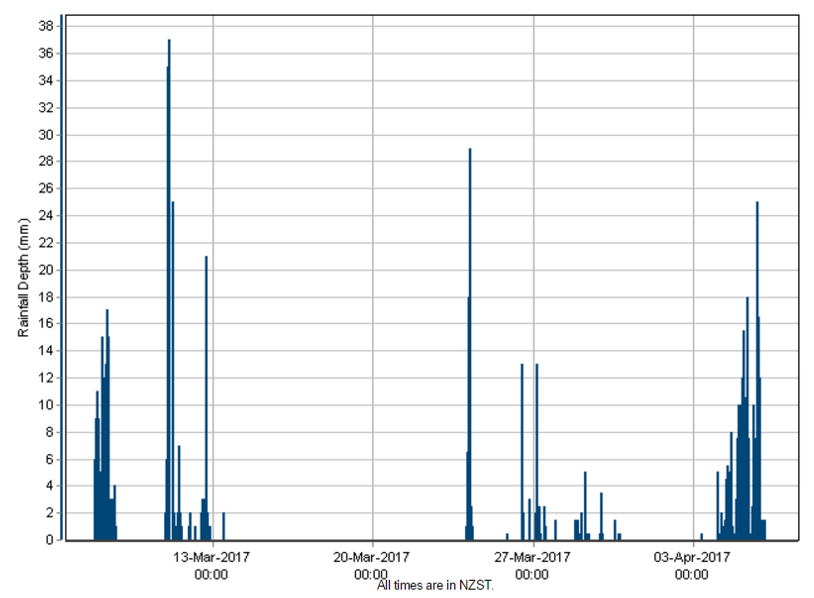 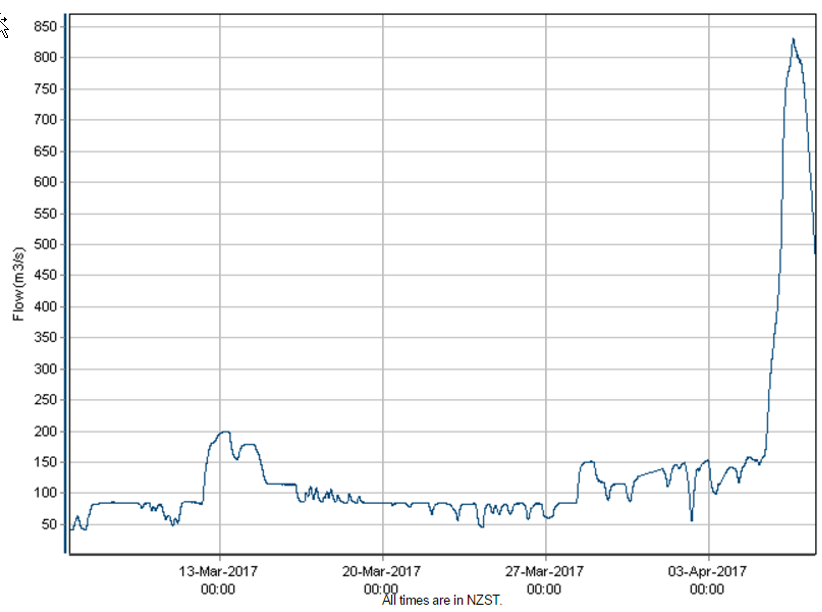 Figure 4: Rangitaiki river flow rates in m3/s over the last week in response to the extreme rainfall event.

Table 8: Rangitaiki river flood flow rates and return periods based on the incorporation of the most recent event with previous data.

The rainfall totals for the Whakatane Aero Aws site and Te Teko rain gauge associated with the river gauging station in the context of the recent Edgecumbe flood event represent an extreme event but not of the magnitude as reported by social media. As is often the case and as we described in the recent Ardmore Treatment Plant issue with the management of extreme rainfall we once again need to look at the regional context and in this case the temporal distribution of extreme rainfall events over the preceding month or months. Then there are the issues of the built environment. In the Edgecumbe case there was a breach of a stopbank in a location that led to rapid and profound flooding of an urbanised area. The extreme event of 2004 flooded 15,000 hectares of farmland and caused considerable damage. That event was also the result of a breached stopbank. Climate change will lead to more frequent and intense rainfall events therefore the link to flood mitigation design be that dams, reservoir management and stopbank design and civil defense responses could all be examined. But these should not be considered in isolation. Environmental management in the future by New Zealand’s pluvial society will continue to be tested. The clear signal of non-stationarity --meaning past events will not necessarily be appropriate for predicting future extreme events -- could exacerbate risks for communities going forward if not recognized and considered. The modelling capacity is available and is being applied elsewhere and is being increasingly called for internationally (TCFD, 2016). How many more examples do we need of overwhelmed infrastructural designs?