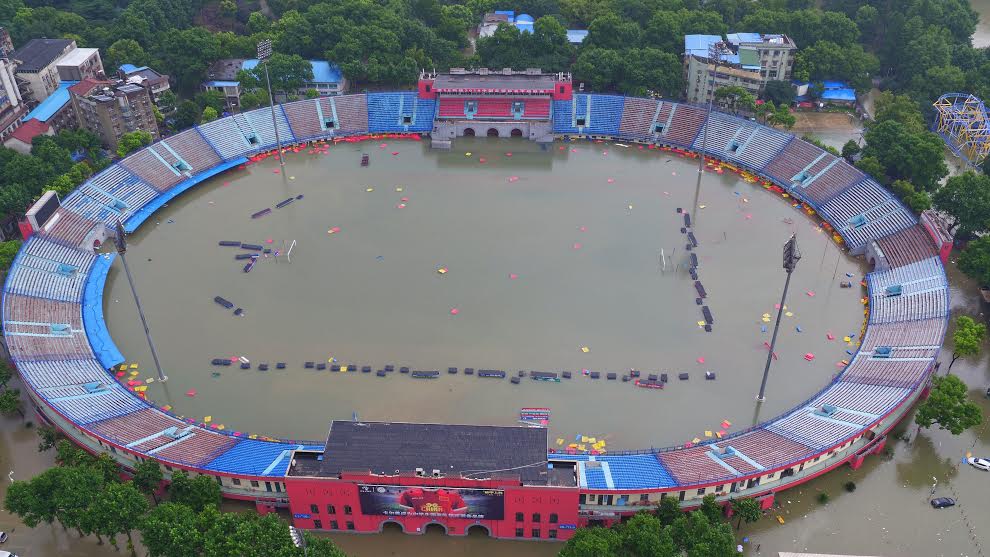 Wuhan, the most populous city in central China, was hard hit by extreme rains in July 2016. Wuhan’s excessive and under regulated urban development is partly to blame. Known as “the city of a hundred lakes,” Wuhan no longer lives up to its name. From 1949 to 2015, the number of lakes in Wuhan’s urban area dropped from 127 to 40 owing to infilling for various construction projects that effectively makes it harder for the city to absorb flood water.

In 2013, the Wuhan government kicked off a three-year project—with a budget of 13 billion yuan (USD 1.9 billion)—to improve the drainage system, and promised the city would not suffer from floods upon the proposed completion of the project in early 2016. But so far the government has applied just 4 billion yuan of the budget, and is postponing according to state newspaper People’s Daily the project’s completion to 2018. The completion of the project cannot come soon enough based on the impacts of the rains of July of this year. 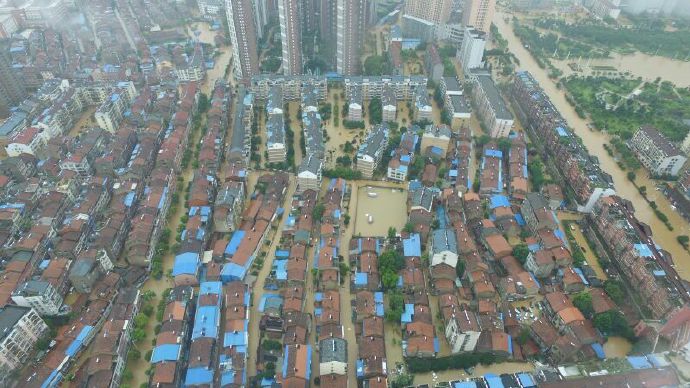 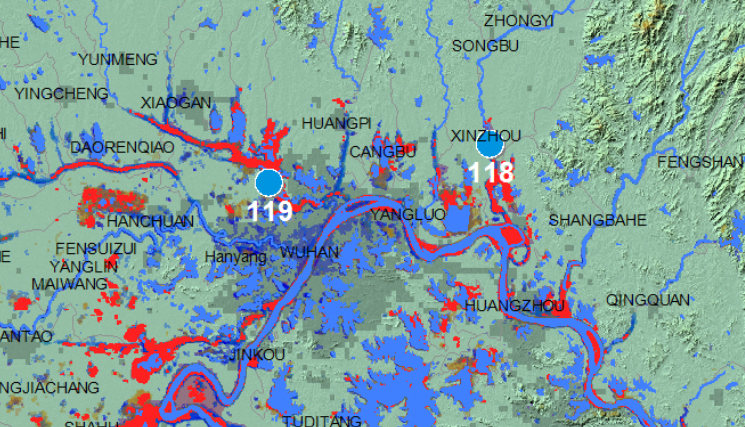 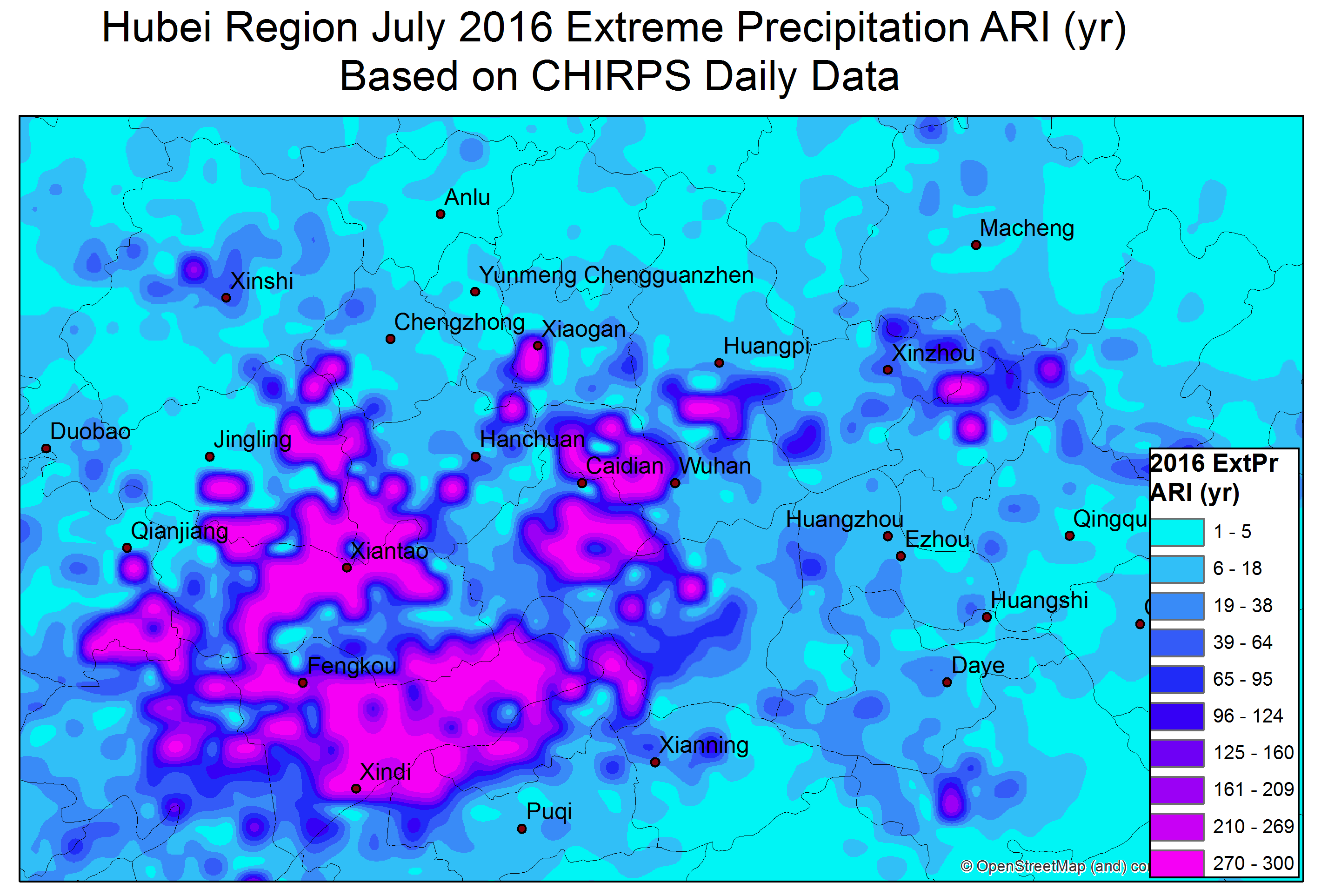 Figure 4: Wuhan is centrally located within this isolated area of extreme rainfall that fell over this region of China in July 2016. The purple to pink colours represent extreme precipitation ARI (Average Recurrence Interval) of greater than 200 years. 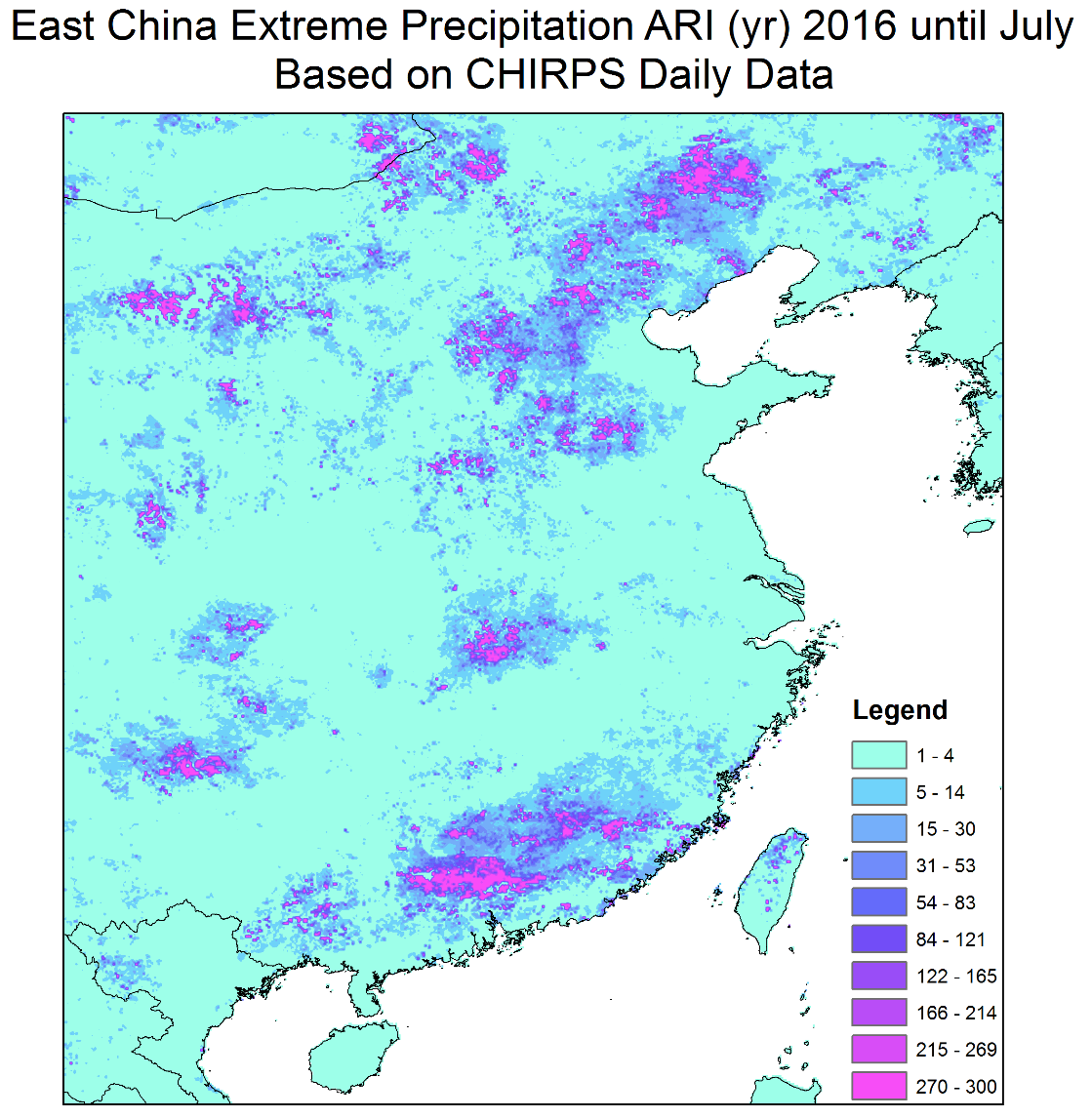 Figure 5: The first seven months of 2016 have been particularly wet for some regions of China. The spatial distribution of extreme rainfall for the year to the end of July shows isolated areas of extreme ARI (Average Recurrence Interval) of greater than 200 years. The value of CHIRPS data post-processed to capture extremes and their distribution can be a powerful tool for validation of flood events and their antecedents and to validate sub seasonal and seasonal forecasts. 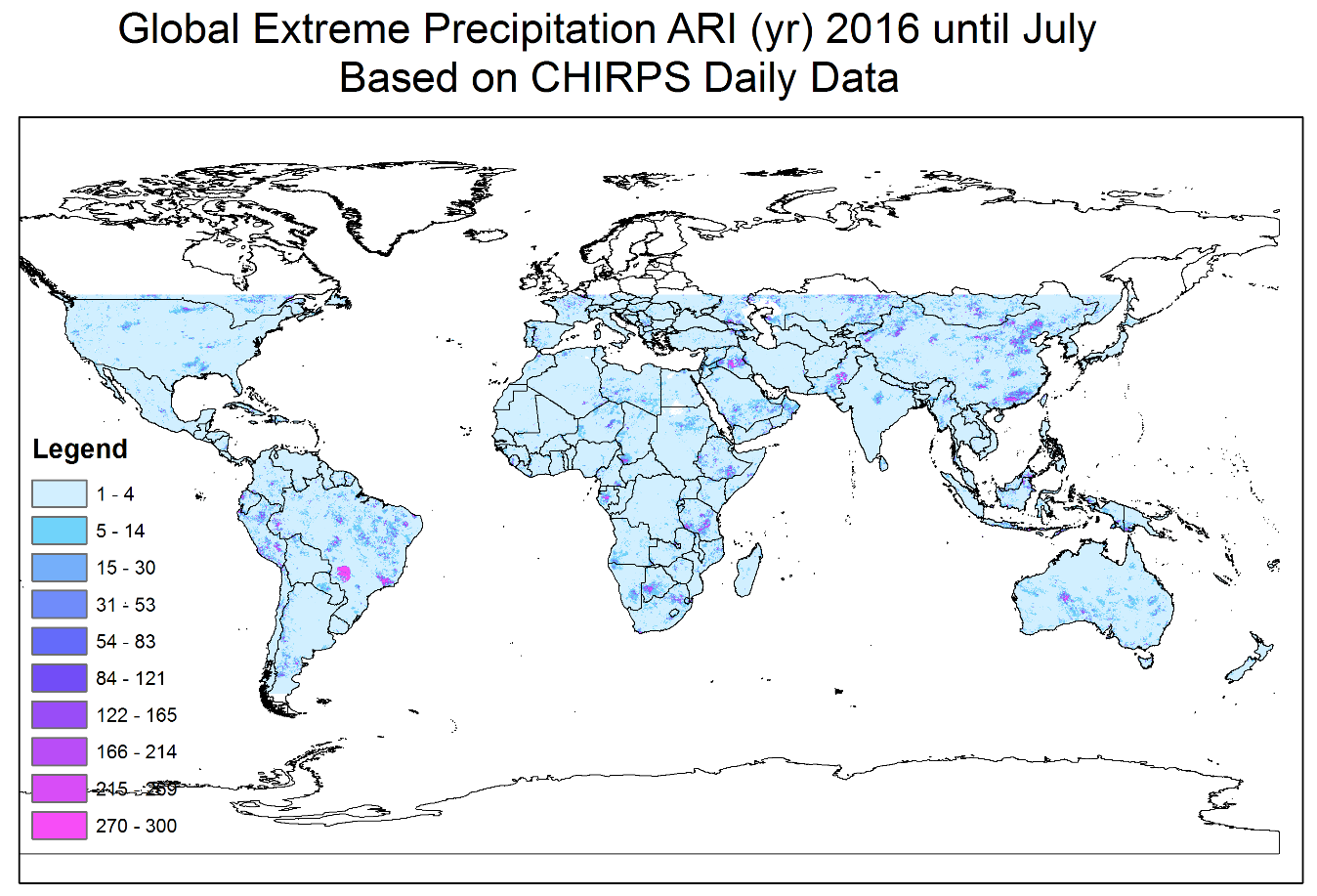 Figure 6: The Climate Hazards Group InfraRed Precipitation with Station data (CHIRPS) is a 30+ year quasi-global rainfall dataset with fresh uploads available every month. It spans from 50°S-50°N (and all longitudes) and started in 1981. The data has been post-processed by CLIMsystems to show ARI (Average Recurrence Interval) of rainfall within the zone of data capture.

Beijing needed to Increase its resilient capacity through an upgrade of its urban drainage system. In a twenty-hour period on July 21, 2012, a flash flood hit the city of Beijing. Within a day 56,933 people had been evacuated to escape flooding with 79 people killed and at least 10 billion Yuan (US $1.6 billion) in damages. At least 8,200 homes were destroyed. Across the city more than 1.6 million people were affected.

Beijing’s response to the disaster of 2012 was to invest heavily in urban drainage. With heavy rain similar to 2012 reoccurring in 2016, the urban flood area was greatly minimised and casualties almost eliminated.

The efficiency of the drainage system was still criticised by the public. This was partly due to yet to be finished construction of drainage infrastructure. Never-the-less the system is operating better than previously. Pumping stations are used to move water out of low-lying areas. The integrated drainage system for rainwater collection using tunnels, pipes, sumps, pumping stations, pools and rivers is much better integrated and is kept clear of potential obstructions. The chance of any link going wrong, or mismatching the standard and capacity of other components will not it is hoped affect overall discharge capacity. 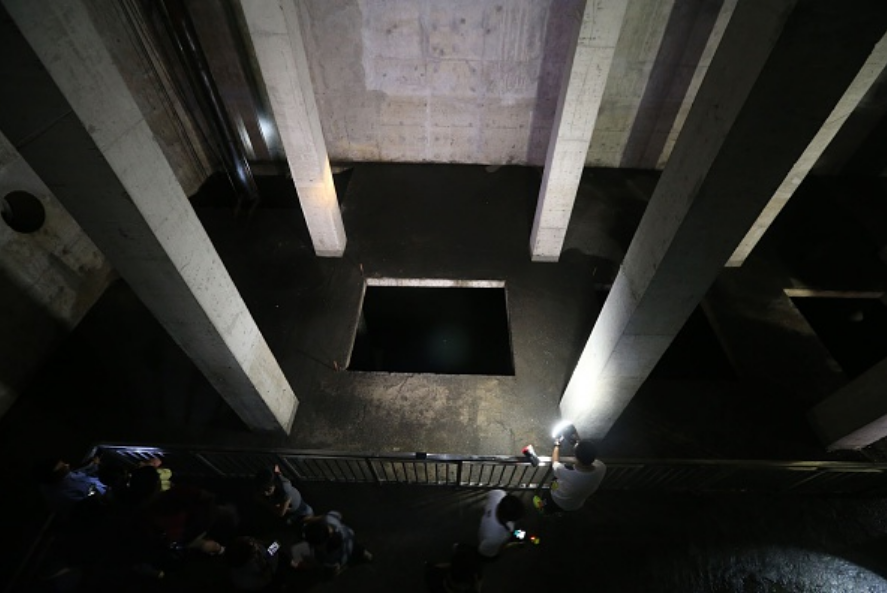 Quality and properly sized infrastructure is critical to support social and economic development of urban areas. For example, power, water, sewerage, telecommunications, and transport are critical for effective urban functions. The cost of either rehabilitating or replacing infrastructure that is damaged by climate change-related extreme events is not only costly but can also significantly delay recovery and rehabilitation of urban areas.

In addition, improving access to infrastructure and other urban services can reduce overall vulnerability to natural hazards and climate change extremes. For example, investments in improved drainage in urban informal settlements can significantly reduce the impacts of flood events in these communities.

However, it is well recognized that there is significant underinvestment in capital development and maintenance for critical infrastructure in many developing countries due to insufficient financial resources as well as weak planning, project execution, and asset management capacity.

During the infrastructure planning phase and development of investment plans, hazard and climate change risk information should be used to screen and assess vulnerability of proposed investments to the impacts of climate change and natural hazards.

For example, building codes may include cyclone-proofing measures such as requiring homes to be constructed using extra-strong fasteners to keep roofs securely fastened during high winds. In Kiribati and Tuvalu, houses must be constructed with rainwater harvesting capacity such as rainwater storage tanks and gutters to ensure that people are better able to cope with drought events that frequently affect these countries.

Low-carbon development strategies can simultaneously promote mitigation, adaptation and resilience and are best implemented through an environmentally oriented and integrated city planning process. Low- carbon development as an urban planning intervention has the potential to reduce energy utilisation by enabling physical proximities between buildings as well as land-uses.

Technology should be leveraged to support of municipal data gathering and management systems; spatial mapping software and remote sensing offers a means to explore and understand the environmental risks associated with cities.

Ecosystem-based measures can also provide an important means of mitigating hazards and reducing exposure and vulnerability to natural hazard and climate change impacts in urban areas by restoring natural ecosystem functions and services. Ecosystem-based solutions are often also less expensive to maintain than engineering solutions, and they can provide multiple benefits whether or not a disaster event occurs. For example, measures such as mangrove reforestation and/or rehabilitation, or banning aggregate mining on beaches, to reduce impacts from storm surges and sea-level rise may provide a more cost-effective option compared with structural measures such as the construction of seawalls. See the dune restoration examples supported by the International Global Change Institute.

Urban resilience also ensures that with the onset of climate change, and when a natural hazard event strikes an urban center, residents are able to effectively respond and recover from such events. This requires investment in the development of early warning systems to give urban residents sufficient time to respond, such as taking steps to protect property and to evacuate to safe areas. Similarly, effective response plans to support emergency relief operations should be in place so that when a natural hazard event takes place, injury and loss of life is minimised. To support emergency response and post-disaster recovery efforts, catastrophe insurance can play a key role in providing immediate financial resources to support post-disaster recovery and to forester new designed that can withstand changing climatic conditions.

Historical and future climate related information is critical for climate resilient infrastructure design. The analysis need be customisable to suit engineer’s standards and codes, and need to be carefully interpreted for and with engineers to avoid mis- or over-interpretation. Poor communication between climate information providers and designers can cause mal-adaptation, and under-adaptation. 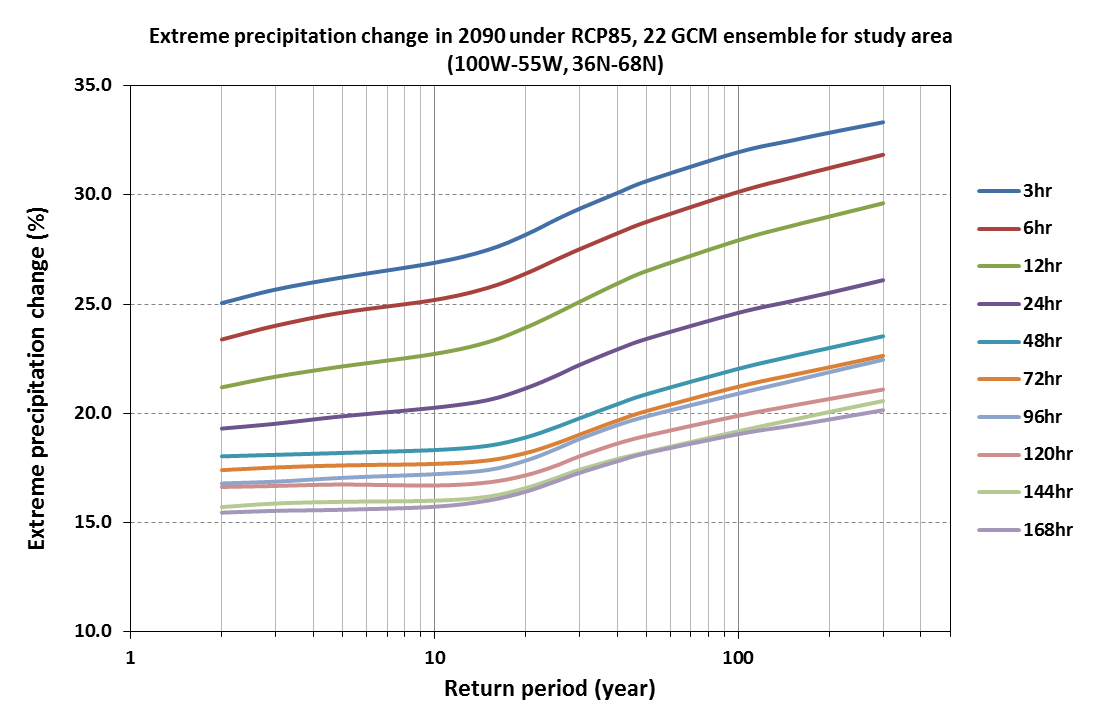 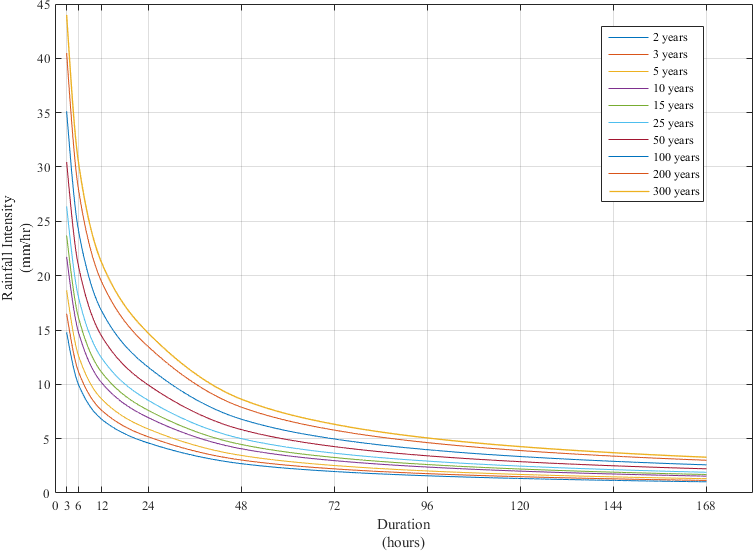 IN the case study presented the key temporal event periods of 3 hours and 24 hours by 2095 increases in IDF in the order of 22 and 18 percent, respectively for the climate change greenhouse gas trajectory society is currently following Representative Concentration Pathway (RCP) 8.5.

The growth in data sources, volume and quality offers the opportunity for multiple lines of evidence to be followed in developing climate storylines for almost anywhere on the planet. Careful vetting of data and application of robust methodologies for post processing are mandatory. As is the careful interpretation of results and their limitations to end user application. The team at CLIMsystems has accumulated considerable data for the global climate system both historical and for future projections/scenarios and maintains the capacity for their analysis and interpretation. We continue to strive to improve our methods and communication and to find and apply the best possible data and methods for complex and diverse climate risk assessments and adaptation planning applications.