The potentially deadly consequences of the ocean's declining oxygen levels on marine life (and impacts on human life), have been studied for many years. A new study published in the science journal Nature (Schmidtko et al., 2017) found that the ocean's worldwide oxygen content declined by more than 2% between 1960 and 2010. That number may seem small but its significance is not.

The research team found that their models predicted a drop in oceanic oxygen by up to 7% by the year 2100. This may not sound like a huge decrease but it would be enough to kill or seriously harm most sea life, including fish species that humans rely on for food. The ocean already contains just enough oxygen to support marine wildlife. Further exacerbating the problem is the fact that warm water cannot hold onto as much dissolved oxygen as cooler water. This means that as the ocean heats up, it will lose oxygen without being able to replace it. The team predicts that this will cause serious problems in coastal regions that rely on marine tourism and fishing for income, assuming no actions are taken to mitigate global warming.

The authors concluded by noting that "far-reaching implications for marine ecosystems and fisheries can be expected." 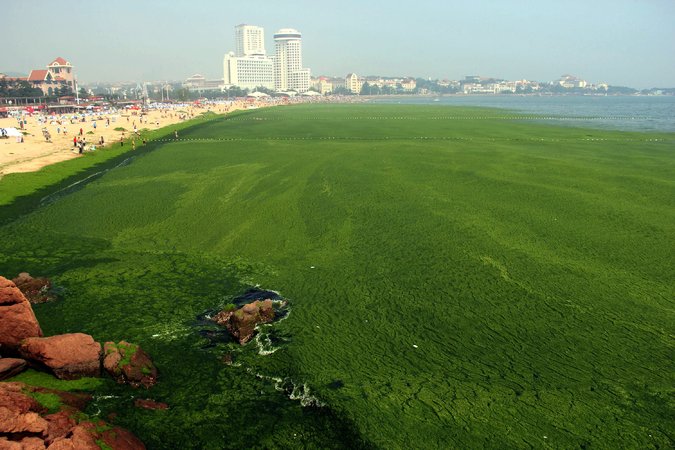 Four principal climate drivers -- pH, temperature, oxygen concentration and food availability -- as identified by the Intergovernmental Panel on Climate Change (IPCC) have wide r4angin impacts on the structure of marine ecosystems, their functioning and capacity to adapt. Climate change is likely to perturb all four with potentially very serious consequences.

Each of these variables can cause substantial change in the physical, chemical, and biological environment, affecting the ocean’s biogeochemical cycles and ecosystems in ways that we are only beginning to fathom (Gruber 2011; Doney et al. 2011; Bopp et al. 2013).

Ocean deoxygenation is the decrease of dissolved oxygen levels in the ocean. It is bound to occur in a warming ocean and is exacerbated by stratification, causing stress to macro-organisms that critically depend on sufficient levels of oxygen.

Primary production: although regionally variable, the combined effect of these changes is predicted to be an overall global decrease in primary production (PP), which is the ultimate determinant of food availability to marine ecosystems

Marine ecosystems provide primary protein and regulation of Earth’s climate via the uptake and storage of atmospheric carbon dioxide. One in seven people derive socio-economic value from these ecosystems.

Henson et al. (2017) demonstrated that the exposure of marine ecosystems to climate change-induced stress can be drastically reduced via climate mitigation. They achieved this result by analysing CMIP5 model results. If within the next 15 years there is a concerted effort to mitigate greenhouse gases, susceptibility could be reduced by 34%. Effectively this would buy an additional 20 years for adaptation in marine ecological and socioeconomic systems. 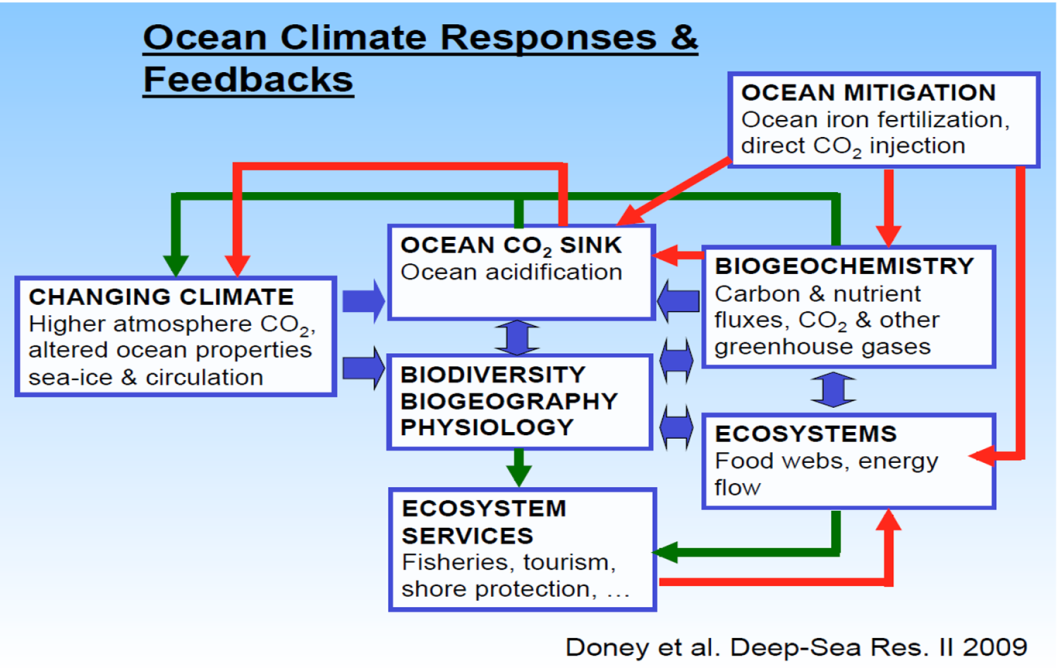 Figure 2: Effect of mitigation on the global emergence in drivers of ecosystem stress. The proportion of the ocean in each year 1900–2100 affected by multiple stress (>1 driver) and quadruple stress (all 4 drivers) in the ‘business-as-usual’ scenario (RCP8.5) and a mitigation scenario (RCP4.5). Shaded areas represent ±1 inter-model s.d. (Henson et al., 2017, figure 4) 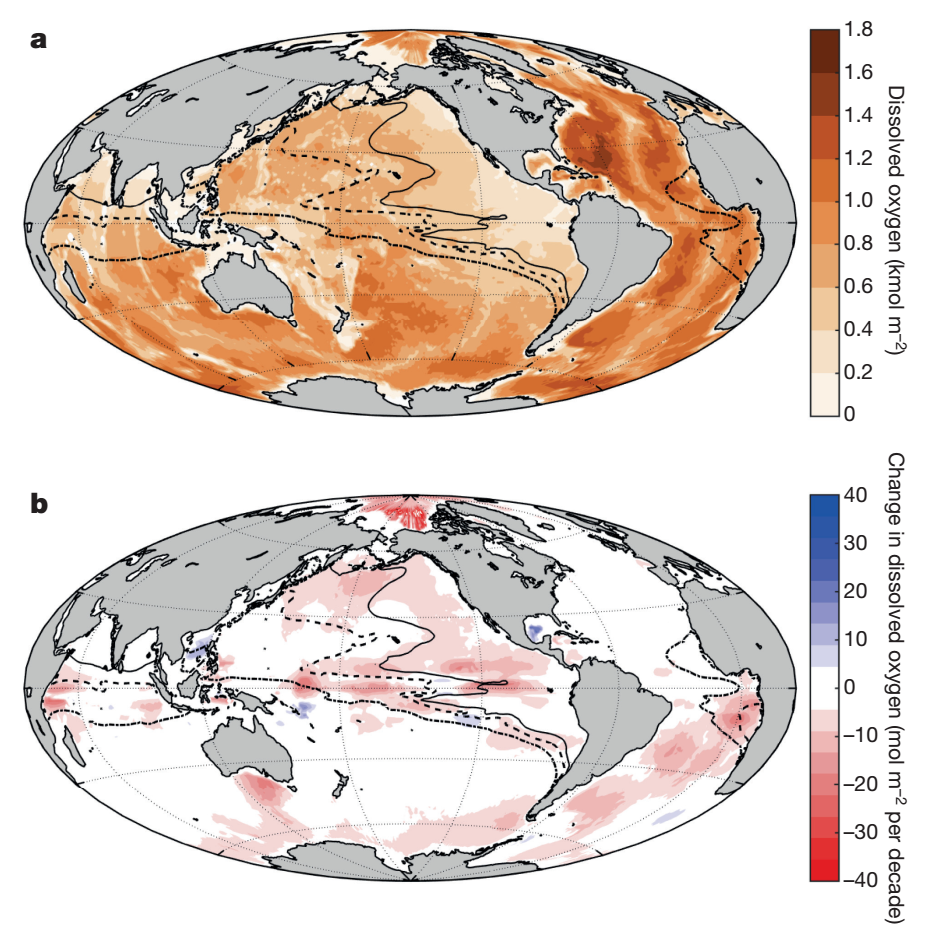 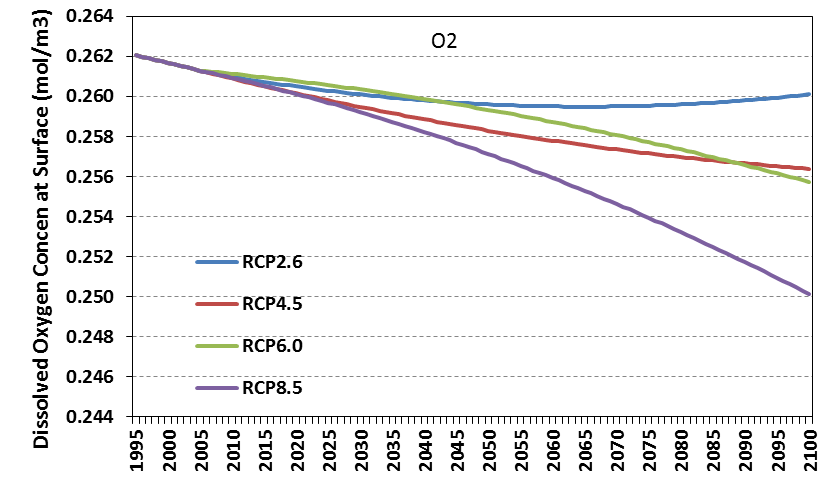 SimCLIM for ArcGIS Marine data represented the CMIP5 model results and the findings of Henson et al., The data and software generated consistent results with observed trends in marine dissolved oxygen concentration change and the variations across ocean basins. As an Esri add-in, the SimCLIM for ArcGIS Marine tool proved to very useful and convenient for modelling marine environment change.

The SimCLIM for ArcGIS Marine add-in is an ArcGIS tool developed by CLIMsystems, for the purpose of exploring the impact of climate change on marine biogeochemical cycles. This add-in incorporates output from the CMIP5 (IPCC AR5) GCM data into a simple tool where users can select any year from 1995 up to 2100 to investigate the projections and changes in nine biogeochemical related variables for the whole global ocean area. The data generated from SimCLIM for ArcGIS Marine add-in can help marine ecosystem researchers, marine resource managers, nature conservationists, managers, planners, policy makers, and general public by providing high resolution maps and state of the art scientific information.

(1) Global area weighted means of each year from 2006 to 2100 were calculated for all the available GCM’s RCP runs.

(2) The GCM ensemble means of each RCP were calculated.

(3) The 95 year values were fitted to smooth curved polynomial lines, that is the global annual mean change value (GV). The difference between 1995 and a projection year is called

(4) For a given climate variable V, its anomaly

being the annual global mean change of variable V.

) was calculated from the GCM simulation anomaly (

) using linear least squares regression, that is, the slope of the fitted linear line.

This number is determined by GCM data availability (not all the GCMs have marine biogeochemical components, and not every model has all the RCP experiments), and data quality (some GCMs have missing data, and other GCMs have data quality problems). Table 1 lists the complete data stored in the SimCLIM for ArcGIS Marine add-in. 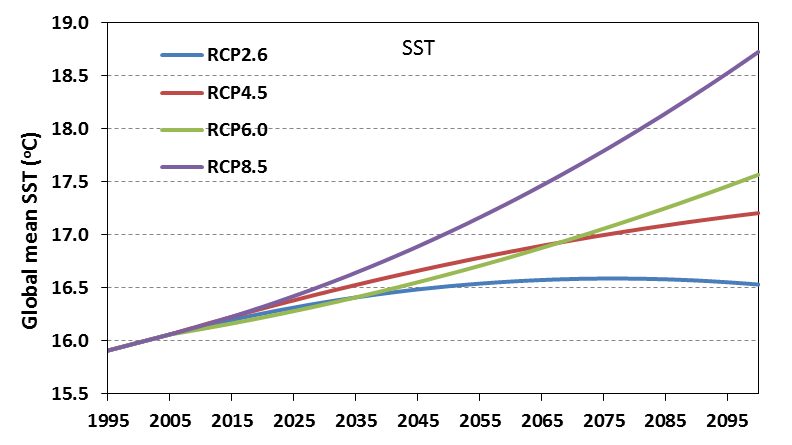 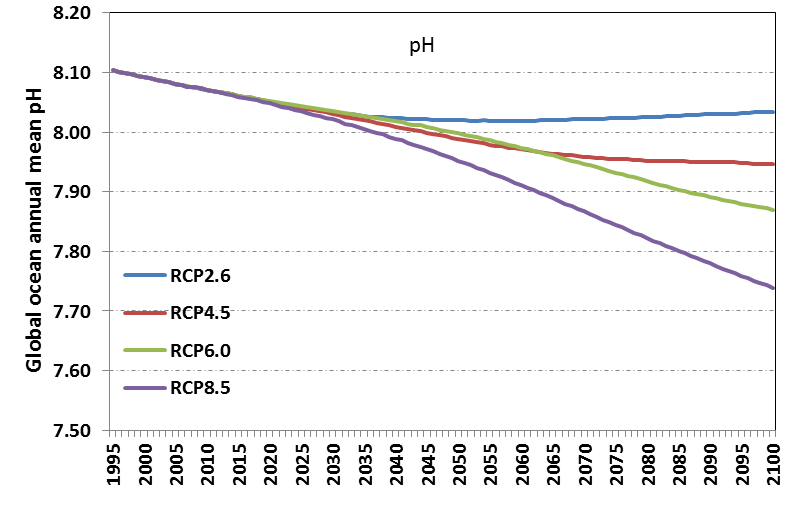 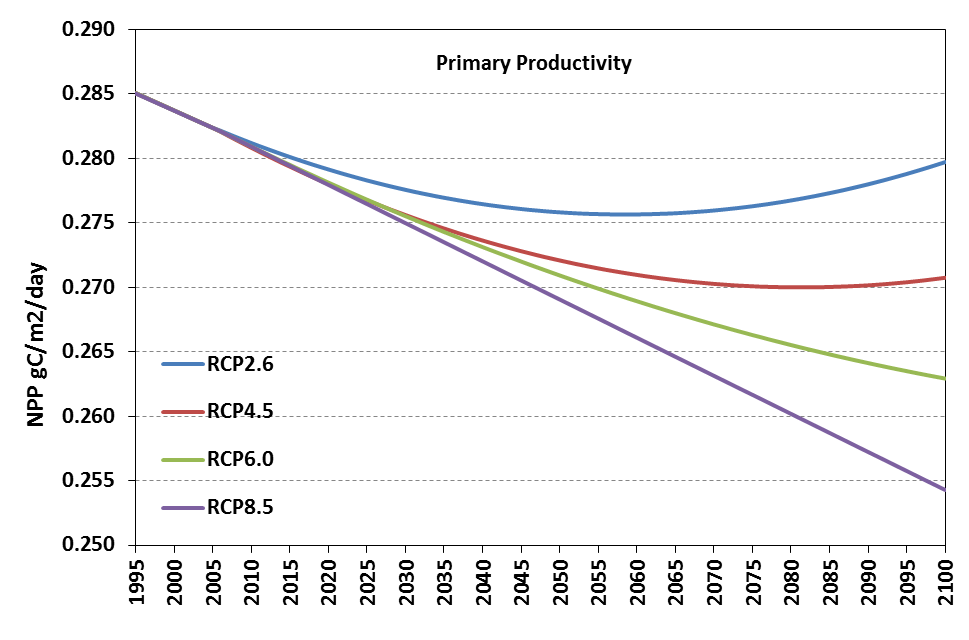 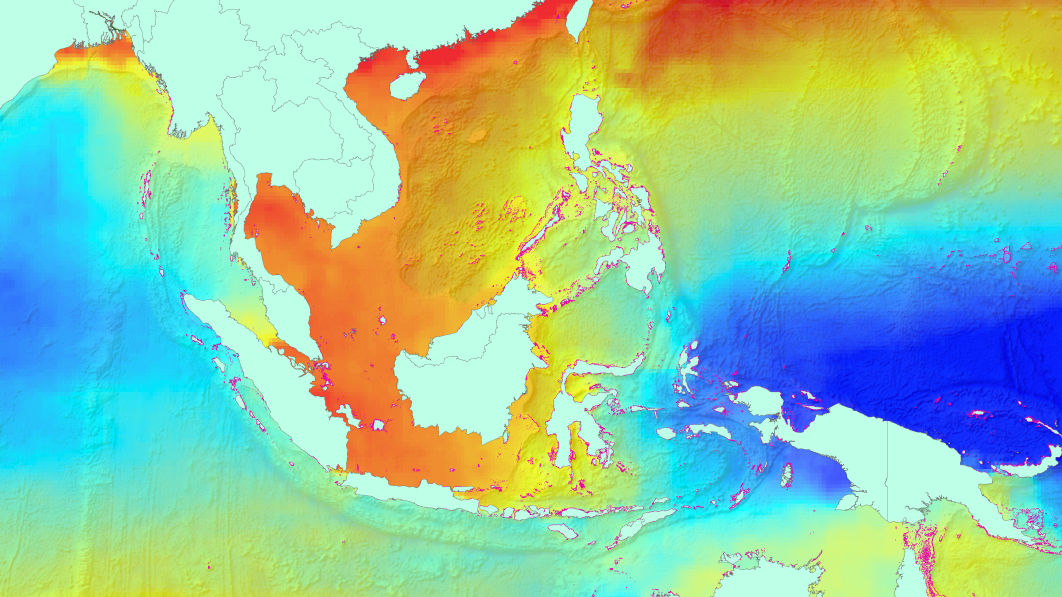 About a third of the CO2 released in the atmosphere dissolves in the oceans, where it slightly lowers the pH. This effect is known as ocean acidification.

Ocean acidification is of great concern: small changes in pH impact the CaCO3-CO2 equilibrium thus slowing coral growth and weakening the coral that does grow under such conditions.

The image shows the result from 12 models from the CMIP5 data for changes in pH. Because pH is a log-scale unit, the ratio of pH for 1995 and 2035 is presented.

The redder colour shows a stronger change. This is mostly occurring in shallower areas, as there is an effect from temperature as well.

As the model-data (using grid-cells of 0.25°x0.25°) does not cover partial cells close to the coastline, the FILTER function of ArcGIS was used to fill in the gaps.

The pH-information is combined with other data:

The image is a beautiful example of how a toolbar (the CLIMsystems SimCLIM for ArcGIS Marine toolbar, in addition to the “Climate” toolbar), combines perfectly with the functionality of ArcGIS.

Changes in the surface chemistry and temperature of the oceans because of climate change, impact the primary production from phytoplankton. The image shows the distribution of the relative change in net primary production. In the blue areas production decreases, and in the yellow/red areas it increases (more than a factor of 2, by 2100 under the RCP8.5 emission pathway).

The contour lines separate the areas of increase from those decreasing.

The increase is mostly situated in the colder regions, while the decrease is primarily in the areas that are already warmer i.e. the Gulf Stream from the Gulf of Mexico to Europe is clearly visible. 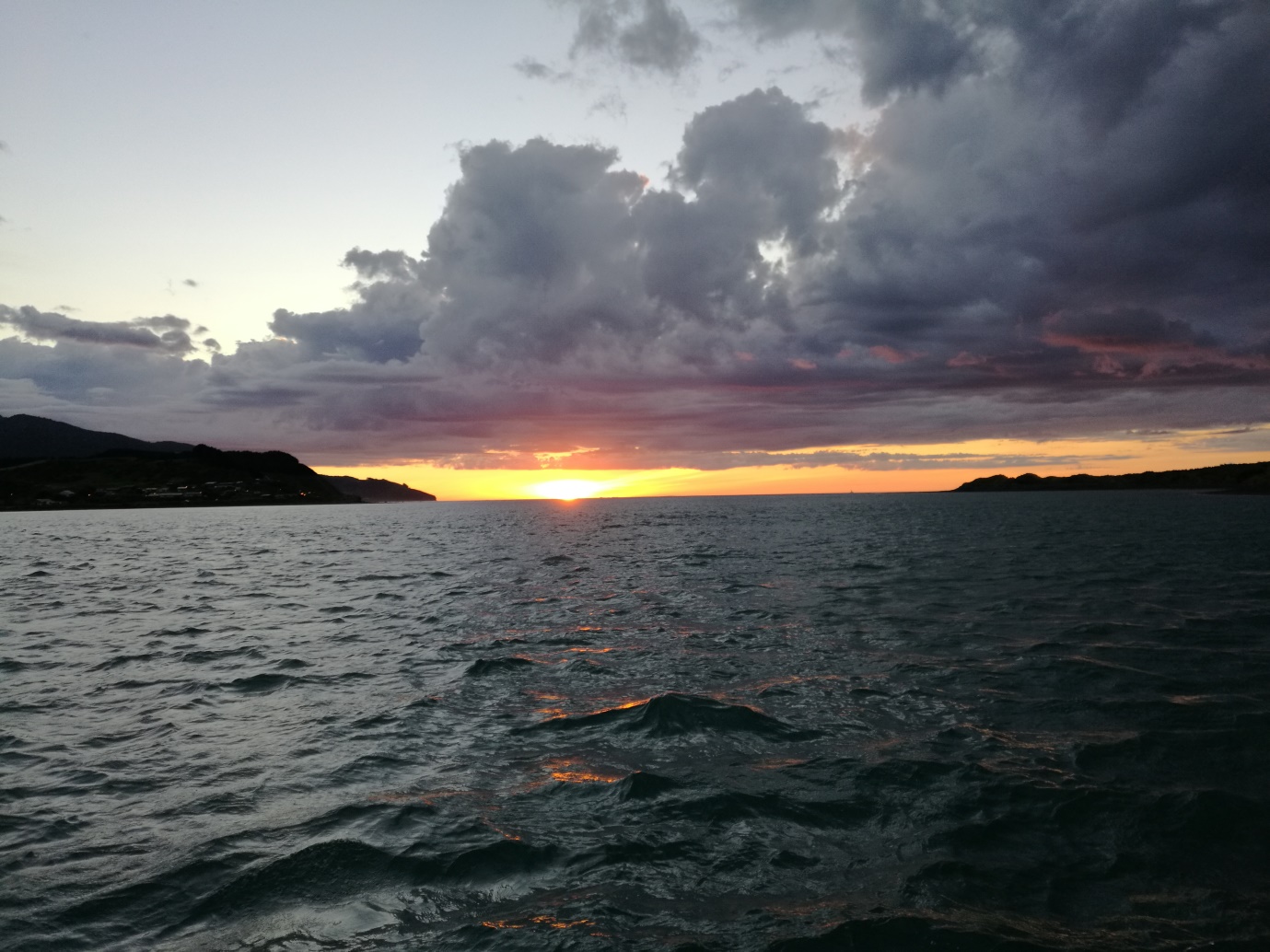 The year 2016 made history, with a record global temperature, exceptionally low sea ice, and unabated sea level rise and ocean heat, according to the World Meteorological Organization (WMO). Extreme weather and climate conditions have continued into 2017.

During its 45th Session (Guadalajara, Mexico, 28 - 31 March 2017), the Panel approved the outline of the Special Report on Oceans and Cryosphere in a Changing Climate (SROCC) to be finalized in September 2019.

Following topics will be articulated in that report: